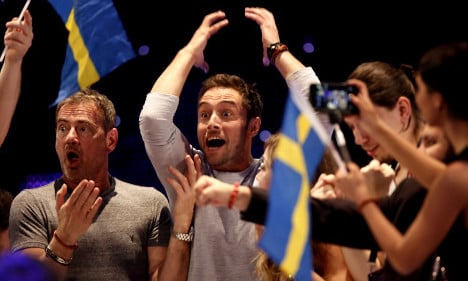 Eurovision winner Måns Zelmerlöw. Photo: AFP
Just three years after the Swedes last won Eurovision, they did it again on Saturday night as 28-year-old Måns Zelmerlöw charmed voters from Europe (and from wildcard entry Australia).
The Lund native was announced as the winner before the vote counting was completed.
READ ALSO: Take a look back at our blog from the evening “I have so much to say, I'm so extremely happy, I want to thank everyone for voting for me and supporting me,” he told the crowd.
“I just want to say that we are all heroes, no matter who we love, who we are, or what we believe in.”
READ ALSO: Five top facts about Måns Zelmerlöw His song, Heroes, by songwriter Anton Malmberg Hård af Segerstad, has certainly been making the rounds in Stockholm's clubs this spring. But most of all it was Zelmerlöw's stage show that no doubt played a part in his sweeping victory in the competition.

In the act, the singer interacts with a series of digital effects surrounding him – even landing a fist bump perfectly with… yes, you read it right, a digital gnome.

It is worth noting that the performance has not been completely uncontroversial and Zelmerlöw's gnome army has been accused of plagiarism, leading the singer's crew to tweak the background digital effects.

Zelmerlöw follows in the footsteps of several other of his countrymen as a Eurovision winner.

Sweden is one of the most successful Eurovision competitors, with previous winners including Abba in 1974, the Herreys brothers in 1984, Swedish icon Carola in 1991 and Charlotte Nilsson with 'Take Me to Your Heaven' in 1999.

The host country Austria came joint last with HGermany with zero points, just edged out by the U.K. which managed five points.