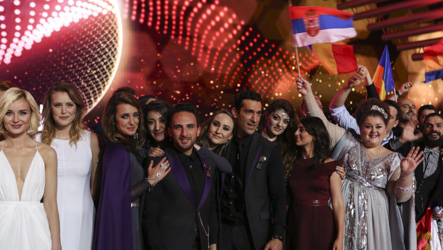 The ten winners from the first Semi-Final on stage. Photo: Thomas Hanses (EBU)

Of the 40 nations competing in the Eurovision's 60th edition under the motto Building Bridges, only 27 will make it into the grand final at the glittering Stadthalle arena on Saturday night.

Australia's Guy Sebastian is among those tipped to win the outlandish annual extravaganza, which attracts some 200 million viewers, along with perennial favourites Sweden as well as Italy and Russia.

Russia, Serbia and Estonia, on the other hand, are amid the 10 countries that made it through.

Generally the nation that wins the competition gets to host it the following year. Austria currently holds this honour as home of the 2014 victor, bearded drag queen sensation Conchita Wurst.

However, this will not be the case if former “Australian Idol” winner Sebastian comes first, with organisers saying the 2016 show will nevertheless be held in Europe. The competition is, after all, a European affair.

Countries don't need to be in the geographical confines of the continent, but they do have to be members of the European Broadcasting Union (EBU), an alliance of national broadcasters from Europe and the Mediterranean region.

Since its launch in 1955, Eurovision has become the ultimate pop platform, catapulting Swedish icons ABBA to worldwide fame, as well as boosting the likes of Celine Dion, Cliff Richard and Olivia Newton-John.

But it is mostly meant as a bit of fun, with many of the songs offering an avenue for the camp, the over-the-top and the downright silly, as evidenced by song titles such as “Diggi-Loo Diggi-Ley”, “Boom-Bang-A-Bang” and “Lalala”.

Memorable contestants down the years have included Irish puppet Dustin the Turkey in 2008, transgender Israeli diva Dana International in 1998, German pop band Dschinghis Khan in 1979 and six Russian grannies in 2012.

Under the current rules, songs may be performed in any language but must not exceed three minutes.

The eventual winner will be chosen by a 50-50 ballot split between viewers at home and professional juries. Neither group is allowed to vote for their own country.

The EBUs' five biggest financial backers – Germany, France, Spain, Italy and Britain – automatically qualify for the final along with the previous year's winner, in this case Austria.

Australia, as honorary guest, was also able to skip the semi-finals, the second of which will be held on Thursday.

Bookies' favourites include Swedish singer Mans Zelmerlow – who tried to enter twice before – and Italy's pop opera powerhouse Il Volo, three young men who performed with Barbra Streisand amongst others.

Meanwhile, Portugal and San Marino languish at the bottom of the table, with odds of 969 to one.

Austria has high hopes that its pop rock outfit The Makemakes, ranked around 26th by betting agencies, will match Wurst's grandiose victory in Copenhagen last year with her anthem Rise Like a Phoenix.

Wurst, who has become an active campaigner for gay rights, returns to the Eurovision on Saturday, interviewing artists after they perform and singing a number from her new album.

There is of course no scientific formula to winning the competition, but research shows that being female helps: of the 59 past winners, 35 were women.

The total cost of the contest is currently estimated at €36.7 million ($41.7 million), considerably less than the whopping €60 million forked out by Azerbaijan in 2012.

“We will organise the whole event with a pinch of humour,” said Eurovision executive producer Edgar Böhm.

“We don't want to take ourselves too seriously, but present ourselves as a friendly country. I hope there will be a lot of laughter.” 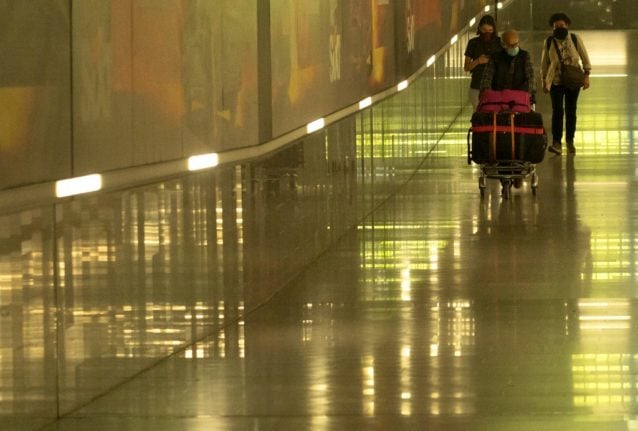 EU countries and the EU Parliament have agreed on details of a digital Europe-wide certificate or “green passport” to give citizens proof of corona vaccinations, tests and having recovered from an infection with Covid-19.

This was announced by the Portuguese Presidency in Brussels on Thursday, and will hopefully make travel easier within the EU.The “digital green certificate” – in the form of a QR code – is to be introduced by the end of June.

Austrian Tourism Minister Elisabeth Köstinger said Austria would have its certificate ready by the beginning of June, and added the fall of the entry restrictions in many countries will make “vacation in Austria” possible again, Der Standard newspaper reports.

The wrong leg of an 82-year-old patient was amputated at a clinic in Upper Austria, Der Standard newspaper reports. The wrong leg was marked before the operation at the Freistadt Clinic. The patient’s second leg must now also be amputated from the middle of the thigh.

The patient and his relatives were offered psychological help, the paper reports, adding the doctor who carried out the amputation is currently not on duty at her own request.

The seven-day incidence, or the number of new infections with the coronavirus in the past seven days per 100,000 inhabitants, is 54.8. In all federal states the number is now below 100 – with Vorarlberg (94.7) and Burgenland (36.0) having the highest and lowest values ​​respectively.

Almost all federal states in Austria now yellow or orange

Vorarlberg is the only federal state to remain “red” or acute risk according to the coronavirus traffic light commission. Burgenland and Lower Austria were switched to yellow (medium risk) by the commission on Thursday, the rest of the country, with the exception of Vorarlberg, to orange (high risk).

Traffic jams are expected across Austria ahead of the Whitsun weekend, broadcaster ORF reports. On Friday afternoon there will be queues at the exits of the larger cities, warns the Ö3 traffic department.

Towards evening, and on Saturday, traffic is likely to shift more to the transit routes, with queues expected in Tyrol (A13, B179) as well as the border points at Walserberg (A8 / A1), the Karawanken tunnel (A11), Spielfeld (A9) and Nickelsdorf (A4).

Delays on the approaches to the tourist regions, such as on the connections on Lake Constance, the Carinthian lakes, in the Salzkammergut, the Neusiedler See, but also in the Wachau are expected.

Austria crashes out of Eurovision

Austria’s performer Vincent Bueno has failed to reach the last round of the Eurovision Song Contest. The 35-year-old singer from Austria “seemed very nervous” during his performance with the ballad “Amen” and could not reach top form, Der Standard newspaper reports.

No wave of bankruptcies predicted in Austria

State aid during the coronavirus pandemic is continuing to cause backlogs in company bankruptcies, the Wiener Zeitung newspaper reports. A  Creditreform survey Austria had the steepest decline in corporate bankruptcies in Europe with minus 40.7 percent compared to the previous year. However,Gerhard Weinhofer, Managing Director of Creditreform in Vienna, no longer expects a large wave of bankruptcies for Austria as soon as state corporate aid expires.

Mood brightening for construction and industry

The latest industry overview from UniCredit Bank Austria, which shows the mood in the industry is increasingly brightening, both in construction and the service sector, the Wiener Zietung newspaper reports.

However, supply bottlenecks for some raw materials and strong demand for intermediate products are  increasing production costs. The situation in retail is more pessimistic, and the retail climate in particular remains gloomy for the time being, according to Bank Austria.

Number of people in employment in Austria declines

The number of people in employment in Austria in 2020 has begun to decline for the first time, resulting in a shrinking of  the proportion of the population that finances the social system, Der Standard newspaper reports.

Population economist Binder-Hammer finds that the current social system is characterized by high taxes for employed people, a strong redistribution to the retired population and less protection for the young, who have suffered most economically in the recent crisis. 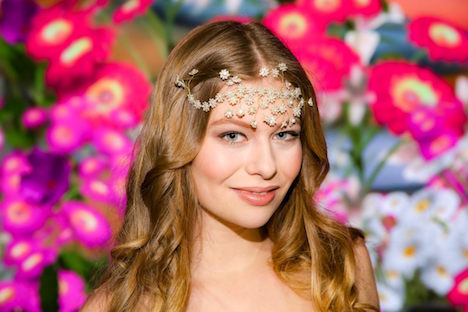 EUROVISION
Zoë: in the footsteps of Conchita