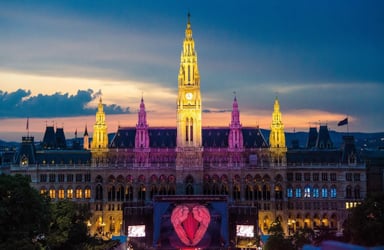 Once again the Rathaus will be lit up for the Life Ball. Photo: Wien.info

This year's event will be reminiscent of the ancient Roman spring festival known as “ver sacrum” – meaning “sacred spring,” which served as a source of inspiration for Gustav Klimt’s golden paintings.

In tribute to the Vienna Secession, the gold-infused theme will include a runway show by Gaultier. Open to all at no cost, the designer’s pre-Life Ball show will be held on Rathausplatz, where some 35,000 people are expected to attend.

The ÖAMTC (Austrian Automobile, Motorcycle and Touring Club) advised car drivers to avoid the Ringstrasse and central Vienna on Saturday evening as traffic jams are expected.

According to the  ÖAMTC the road could also be closed to traffic around the Rathaus, Burgtheater and parliament from 6pm.

The ÖAMTC recommends using public transport, especially the U-Bahn, if you are planning to travel through the city centre on Saturday evening. Some diversions and delays are to be expected on the tram lines 1, 2, 71 and D from 3pm.

Life Ball guests are expected to party at the Rathaus until at least 5am. On their way home they might spot some of Vienna's new traffic lights, illuminated with images of same-sex couples, as a sign of the city’s open-mindedness and a welcome for Eurovision Song Contest visitors.