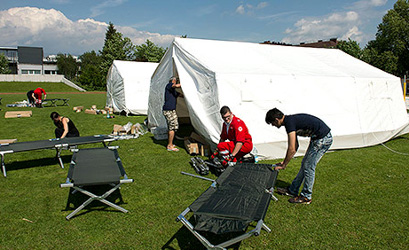 The interior ministry announced the measures on Thursday in response to a surge of asylum seekers – over 600 asylum applications have been made this week alone, mainly from people displaced by the wars in Afghanistan and Syria.

Interior Minister Johanna Mikl-Leitner (ÖVP) said at an emergency summit held in the ministry on Friday that the tent shelters are necessary due to an “explosive increase” in the number of refugees and are a “last resort to protect against homelessness”.

The government says two tent shelters will be set up in Upper Austria, and one in Salzburg.

A deportation centre in Styria will also house refugees, and a refugee compound in Vienna's third district is being reactivated on Friday.

However, Catholic charity Caritas and the Red Cross have criticised the plan as cynical and insufficient and called for an alternative form of accommodation.

Caritas general-secretary in Vienna, Klaus Schwertner, said that proper shelters should be found to house the 300 refugees slated to move into tents.

He added that he believes the government may be trying to put pressure on the European Union with shock images of the migrants in the camps.

The Secretary General of the Red Cross, Werner Kerschbaum, said that Austria is one of the richest countries in the world and it shouldn’t be necessary that refugees have to live in tents. “For us, this is the worst possible solution,” he said.

Greens leader Eva Glawischnig said that Mikl-Leitner was exaggerating when she declared “several hundred asylum seekers as a state of emergency”.

She said that if a small country like Lebanon could take in hundreds of thousands of refugees from neighbouring Syria then Austria should be able to cope.

She added that Mikl-Leitner had failed to plan for the predicted rise in refugees from Syria and called for vacant army barracks to be made available as accommodation.

Last year Germany also had to resort to using huge tents and shipping containers to shelter growing numbers of refugees.

The proposal foresees the mandatory redistribution of asylum seekers across the 28-member bloc, to help ease the burden on southern nations where refugees first arrive by boat.

The scheme has been opposed by a number of countries, including Britain and Hungary.

Austria received more than 28,000 asylum requests in 2014, three times the European average relative to population size. This year, 14,200 demands were already made between January and April.