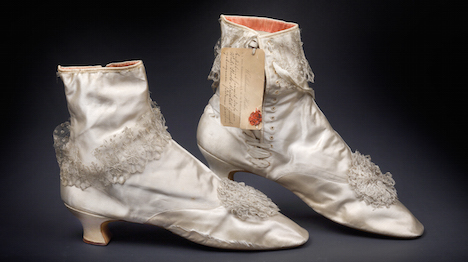 Following a heated bidding battle via telephone and within the auction hall itself, the boots were finally sold to Vienna's Sisi Museum at the Imperial Palace.

Sold for the same sum was a travel, writing and sewing set given to the empress when she was still a young princess, which eventually went to a telephone bidder.

Sisi, also known as the Empress of Austria and Queen of Hungary, was the wife of Emperor Franz Joseph I.

Born into Bavarian royalty, Elisabeth enjoyed an informal upbringing, before marrying Franz Joseph when she was 16 years old. The exceptional lidded bowl commissioned from the Sèvres porcelain manufactory by Emperor Napoleon I. on the occasion of the birth of his son, the future Napoleon II., King of Rome, was sold for €87,500, while an excellent Ferdinand Georg Waldmüller portrait of Emperor Franz I. of Austria went to a bidder at the auction hall for €81,250.