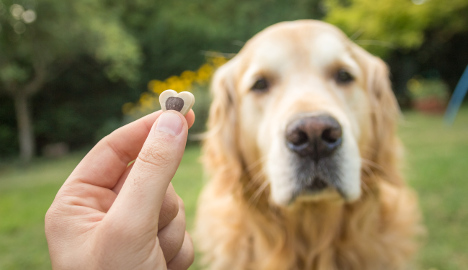 Last year, 47 postmen and women across Austria were bitten by dogs whilst on duty.

Now a pet shop is supplying Austrian Post with ten tonnes of dog treats per year.

Postwoman Maria Stocker, from Salzburg, told the ORF website that she always has a pocketful of dog treats when she’s out delivering letters and packages to homes, and as a result has become very popular with her four legged clients.

“I’m now known as the ‘treat lady’ – and the dogs are always well behaved – even though they used to see me as a threat. Now they know that I’m a friend and not an intruder.”

A spokesman for Austrian Post AG, Kurt Obermann, said that providing employees with dog treats was a new concept to protect against aggressive dogs who took their ‘guarding’ duties very seriously.

“Our postmen and women often have to approach strange houses to do their jobs, and of course most dogs are wired to defend their territory. We want to protect our employees against any run-ins with dogs,” he said.

Dog owners have welcomed the move. "It’s a good idea. Although it won’t be necessary for our postman as our dogs have always liked him,” Salzburg-based dog owner Hans Hollaus said.

“Our dogs will certainly be pacified if they’re given treats and then they’re less likely to be aggressive,” dog owner Maximilian Pfeifenberger said.

Salzburg dog trainer Johanna Thurner said that it’s no cliche that dogs often see the postman as an enemy.

"For a dog the postman is someone who enters its territory every day and then hastily leaves. So the dog believes it has won and that by barking and growling it has done everything right,” she said.

She added that dog treats could certainly help defuse the situation – although some dogs are more interested in getting hold of the post.