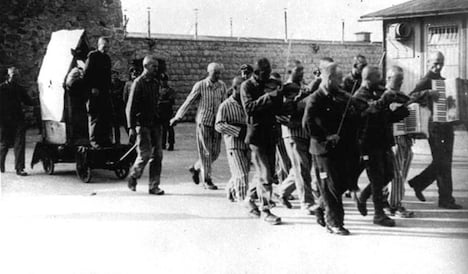 "In a time where intolerance and discrimination are still issues both in Austria and abroad it is all the more important to remain aware of what this behaviour led to 70 years ago," said Willi Mernyi, chairman of the Austrian Mauthausen Committee.

The ceremony at the former camp near Linz was attended by people from all over Europe and beyond as well as Austria's president and chancellor, the Czech premier and the speakers of the Greek and Belgian parliaments.

Mauthausen in Hitler's native country was the Nazis' only category III camp, created for "incorrigible political enemies of the Third Reich" and incorporating a vast network of 49 subcamps.

Some 200,000 prisoners from all over Europe and the Soviet Union passed through. Half of them died — through disease, beaten, gassed, shot or worked to death in granite quarries and armaments factories.

On Friday, the 70th anniversary of the end of World War II, Mauthausen's website was hacked with images of child pornography in what the Austrian government called a "criminal, sick attack".