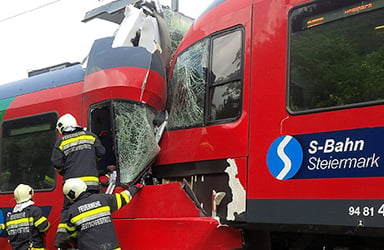 The accident, near the southern city of Graz, occurred after one of the trains apparently failed to observe a stop signal, said Helmut Wittmann, chairman of local train operator Steiermärkische Landesbahnen.

"Today we lost one of our colleagues," the Austria Press Agency (APA) quoted him as saying.

The driver had remained stuck inside his cabin after the crash and died at the scene after "fighting for his life", the Red Cross said.

The other driver and a 60-year-old woman suffered life-threatening injuries and were airlifted to hospital. Six other people, including two children, were seriously injured.

The accident happened around 10:20am near the train station of the village of Waldstein, 30 kilometres north of Graz.

District fire chief Gerhard Sampt told the ORF that fire fighters were greeted with a horrifying scene: "Passengers were lying around on the train floor, seriously injured, and we then found the trapped driver who was in a critical condition and unresponsive."
Ten fire brigades were at the scene as well as a Red Cross team and two rescue helicopters.
"The damage is considerable so we think the trains were travelling at average speed for this stretch of track. We assume though that the brakes were applied," a fire brigade spokesman told AFP.