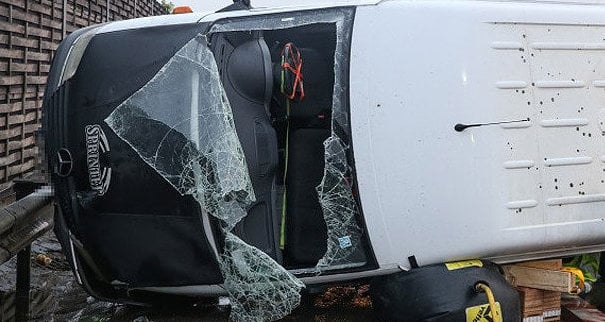 The driver of the minibus, which was carrying six passengers, lost control of his vehicle – which crashed into a car trailer, skidding and overturning.

One of the passengers, a 60-year-old Romanian, was thrown from the car and killed. The driver and one other passenger were slightly injured and two other passengers suffered serious injuries.

The man who had tried to take control of the wheel fled the scene of the accident but was caught later that day by police.

The accident happened at around 5am as the six Romanians were returning home after a trip to England.

The 29-year-old man in the front seat started arguing with the 30-year-old driver and then started physically attacking him and tried to take control of the minibus.

After the van had crashed the 29-year-old fled the scene on foot, but was tracked down and arrested that afternoon with the help of a police helicopter and a team with sniffer dogs.

A seven kilometre tailback clogged the motorway, disrupting early morning traffic, with two lanes in the direction of Vienna having to be closed. The motorway was reopened at around 7.20am.