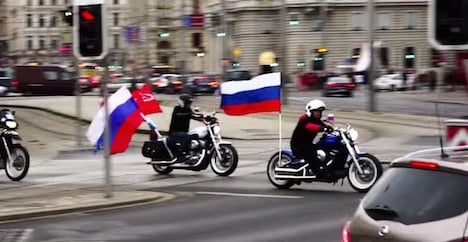 The controversial gang of Russian nationalists has attracted global attention after Russian president Putin showed solidarity by riding with the gang.

A small contingent of the gang visited Vienna on their bikes, as part of a European tour to celebrate the Russian victory over fascism.

Ten of the bikers also reportedly crossed into Germany from Austria.

A German government source told AFP last Saturday that "entry has been refused to certain leaders of the Night Wolves and visas obtained on false pretences have been annulled."

Polish Prime Minister Ewa Kopacz described the rally as a "provocation" and Warsaw on Friday refused entry to any organized biker group that includes members of the Night Wolves," giving its reason organizational concerns.

Russia's foreign ministry said it was "indignant about the refusal of Polish authorities" and accused Warsaw of lying about the real reasons it was barring the bikers.

The Night Wolves are closely linked to President Vladimir Putin, who has joined the bikers several times at rallies, riding a Harley-Davidson trike, and called them his "friends."

The bikers said they were not discouraged by the bans.