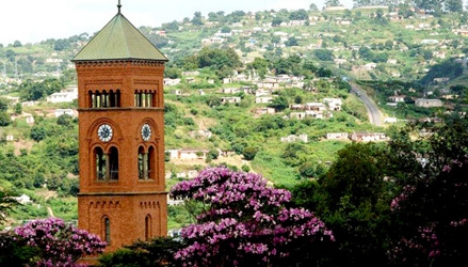 Sister Gertrud Tiefenbacher, from the Sacred Heart Home Convent in the village of Ixopo, southwest of Durban, was found murdered in her room after being suffocated with a towel, and her hands tied with an electric typewriter cord.

Police said the three male suspects, aged between 25 and 35, would appear in a local magistrate's court on Wednesday on murder, robbery and rape charges.

"They were found in possession of some of the stolen property which were positively identified as property belonging to the victim," police said in a statement.

"It is alleged that foreign currency had been taken from Tiefenbacher's room. It is also suspected that the victim was raped before she was killed."

Austrian-born Tiefenbacher was buried on Monday in Ixopo after a church service at Sacred Heart, where she worked as a school secretary and administration officer for 40 years.

Her family in Austria were unable to attend the funeral, according to a report by News 24.

The service was attended by fellow sisters and former pupils.

The killing shocked the small village, which was the setting for South African author Alan Paton's novel "Cry the Beloved Country".

"We still cannot believe she is gone but she is in the Lord's hands now. She did not deserve to die this way," one nun told News 24.

Tiefenbacher moved to South Africa 50 years ago to work for the Roman Catholic Church.