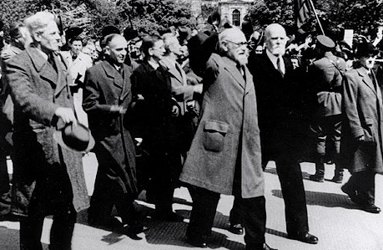 A state ceremony is being held in Vienna’s Hofburg palace in the morning, with German president Joachim Gauck attending.

In April 1945 Austrian statesman Karl Renner declared Austria separate from Germany and set up a government which included socialists, conservatives and communists.

A significant number of these were returning from exile or had been imprisoned by the Nazis, and thus had played no role in the Nazi government.

This contributed to the Allies treating Austria more as a liberated, rather than defeated, country, and the government was recognized by the Allies later that year.

Austria was occupied by the Allies from May 9th 1945 and was divided into four Zones controlled by American, British, French and Soviet Army personnel, with Vienna being also divided into four sectors – with an International Zone at its heart.

On May 8th Austrian Chancellor Werner Faymann will hold a ceremony at the chancellery to mark the 70th anniversary of the end of World War II and the liberation from Nazism.

In the evening the now traditional ‘Festival of Joy’ will take place on Heldenplatz – with the Vienna Symphony Orchestra playing Beethoven’s 9th Symphony in a free concert.