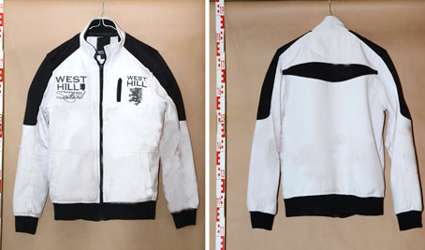 The jacket which led to Erwin K's arrest. Photo: Police

His DNA was already on a police database as he was found guilty of strangling his girlfriend in 1990, for which he received a 20 year prison sentence.

"He is 46-year-old Erwin K., and is strongly suspected of having committed the murder," Christian Hubmer, a spokesman for the Wels prosecutor, told Austrian media.

Traces of DNA on a black and white sports jacket which was found near the crime scene were linked to Erwin K., a German national. He was only released from prison in February after having been sentenced a second time for robbery, credit card fraud and assault.

Hubmer said that Erwin, described as a loner, was considered dangerous and members of the public had been warned to stay away from him in the wake of the murder and not be tempted “to play the vigilante”.

After the 56-year-old taxi driver was stabbed on Monday a Europe-wide manhunt was launched.

After receiving a tip-off from hotel staff, plain clothes police arrested Erwin K. in the Hotel Greif in Wels on Thursday evening. He was taken by surprise and did not resist arrest.

The motive for the stabbing is still unclear but police suspect that he had planned to rob the taxi driver. She only had €66 from the day’s fares and was stabbed repeatedly in the face, head and neck with a jackknife.

"We don’t believe that there was a personal connection between the alleged offender and the victim," Hubmer said.