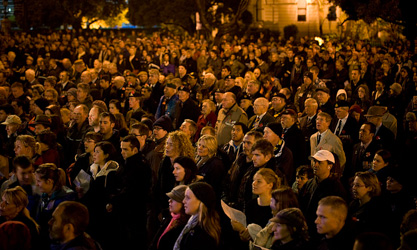 Anyone wishing to attend is asked to arrive by 5.30am at Karlsplatz for the ceremony which will begin at 5.45am.

Anzac Day is one of the most important national occasions for Australia and New Zealand.

The Gallipoli campaign was one of the bloodiest of World War One. About 131,000 died in the campaign, including 55,000 Allied forces and 86,000 from Turkey. Ten thousand soldiers from Australia and New Zealand died.

The battles produced the legend of the courageous Anzac soldier who was able to endure an eight-month ordeal with good humour and comradeship.

By joining the global conflict, Australia and New Zealand helped establish themselves on the international stage.

At the outbreak of World War One they were both fledgling countries. Australia had only become an independent nation 13 years earlier in 1901, while New Zealand was granted effective independence from Britain in 1907.