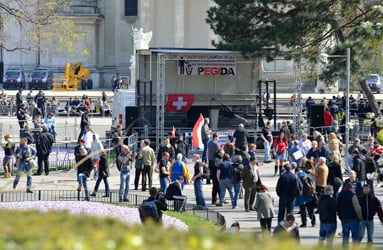 Police said an estimated 200 followers of the so-called "Patriotic Europeans Against the Islamization of the Occident" turned up for the march in Ressel park in the centre of Vienna.

They were confronted with 600 counter-demonstrators, with police barriers separating the two groups.

Four hundred police officers were on duty for the protest and six people were later charged with making Hitler salutes.

The counter-demonstrators gathered outside the Technical University, and made their way to the Karlskirche where they tried to drown out the Pediga supporters by chanting “Down with Pegida” through loud speakers.

Pegida guest speaker Ignaz Bearth, from Switzerland, made a speech against immigration, the EU and "radical-left fascists” and called on Pegida followers to “preserve your own culture and not finance your own genocide”.

They responded with cries of “We are the people!”.

Pegida Vienna organisers had asked followers to avoid making any gestures or symbols which would contravene Austria's anti-Nazi Prohibition Act.

Several people were spotted doing modified versions of the Hitler salute – one such version is the so-called "Kühnen salute" with extended thumb, index and middle finger. This salute is a criminal offence in Germany, but not in Austria.

In Germany, Pegida marches began with several hundred supporters last October and peaked in January, just after the deadly Islamist attacks in Paris.

But the weekly Monday rallies have since waned to several thousands following internal splits, after an outcry sparked by its founder Lutz Bachmann posting pictures on Facebook of himself looking like Adolf Hitler.