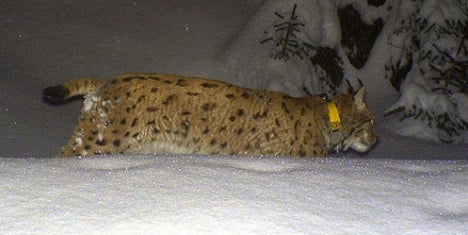 The newspaper reports that the taxidermist was given the dead wildcat by a 64-year-old friend who is a passionate hunter and had presumably poached the animal from the national park.

Prosecutor Andreas Pechatschek confirmed on Tuesday that “a tip off led us to the freezer”. The wildcat was wrapped in a plastic bag and was frozen stiff.

The dead wildcat is believed to be either Juro, who was last seen alive in June 2013, or his son, Jago, who is also missing. DNA samples from the corpse will be sent to a laboratory to identify which lynx it is.

"The suspects now face charges of violating hunting rights as well as an environmental offence – having endangered the lynx population by poaching," Pechatschek said.

"This far exceeds my worst fears," National Park director Erich Mayrhofer told the Kurier newspaper. He added that he was prepared for “more sad news”, as two other male lynxes have not been seen for some time.

The National Park Committee plans to introduce more wild males into the area to safeguard the population.

The lynxes were relocated from Switzerland to Austria in 2011 and 2014, as part of a conservation project.

The reclusive wild cats, who mainly hunt roe deer and chamois, were extinct for 100 years but are gradually being reintroduced to their natural habitat through breeding programmes in the Czech Republic, Slovenia, Croatia, France, Switzerland and Austria.

The WWF says that Austria has a special role as a hub for networking different lynx populations and keeping the gene pool diverse.

PARTNER CONTENT
How to become a Lord or Lady (and help save the Scottish Highlands)
LYNX
Lynx cubs in Carinthia and Upper Austria
Url copied to clipboard!