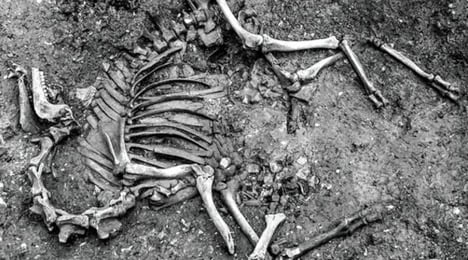 The bones were found in a cellar in Tulln. Photo: Galik

You could be forgiven for thinking this was an April Fools', but Vienna's University of Veterinary Medicine confirmed the exotic animal had indeed been unearthed in the town of Tulln nine years ago.

In a country where cows dominate the rural landscape, the discovery initially led scientists on a goose chase.

"The partly excavated skeleton was at first suspected to be a large horse or cattle," said archaeozoologist Alfred Galik whose findings were published on Wednesday in the scientific journal PLOS ONE.

"But one look at the cervical vertebrae, the lower jaw and the metacarpal bones immediately revealed that this was a camel."

Galik and his team also found that the cross-breed camel had been most likely used as a riding and transport animal by the Ottoman army during the Siege of Vienna in 1683.

If modern-day scientists were stumped by the find, it would have been an even greater shock for residents of 17th-century Tulln.

"The animal was certainly exotic for the people of Tulln. They probably didn't know what to feed it or whether one could eat it," Galik said.

While Roman-era camel bones occasionally surface in Austria, Serbia and Belgium, the Tulln discovery was the first complete camel skeleton to emerge in Central Europe.

"This means that the animal was not killed and then butchered. It may have been acquired as part of an exchange," said Galik.