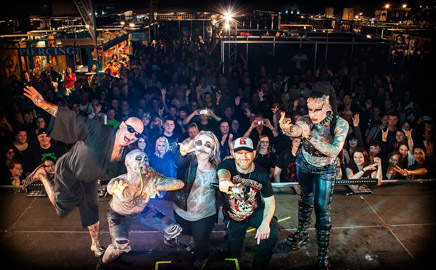 Metal fan Jochen Auer, from Bad Ischl, founded Wildstyle in 1995. Back then it was a new and exciting concept which brought together the avant-garde, cutting edge, and creative forces that were changing the face of youth culture.

Renowned tattoo artists and people from across the world flocked to attend the event – the first international tattoo convention.

The 20th anniversary show kicks off in Vienna on 11th and 12th of April at Planet.tt in Gasometer. On 18th and 19th April it continues in Salzburg at the Sporthalle Alpenstrasse and on 25th and 26th April the show travels to Innsbruck's Messehalle D. Further dates will be announced for Graz and Linz. A day pass to the event costs €20.

When Wildstyle began the Austrian tattoo scene was a few years behind America and the UK but Auer told The Local that now, every fifth Austrian has a tattoo – and even if that's just a small swallow or butterfly tattoo – there’s a growing interest in body art.

Piercing and body modification were just starting to become fashionable when Wildstyle began but are now more mainstream.

Wildstyle caters to a “normal” audience Auer says, but insists that it’s also a family show and attracts people who might be perceived as conservative, as well as those with extreme tattoos.

“Wildstyle isn’t judgemental, everybody’s welcome, whether you have tattoos or not. And then we have the suit and tie members of our audience who may have some crazy tattoos under their workwear. We cater to all cultures and ages and races and we want everyone to have fun. Wildstyle is about tolerance and making the world a more colourful place,” he said.

He believes that for many people, a visit to Wildstyle proves to be “a gateway drug to getting their first tattoo, they come because they’re curious and then end up getting hooked. I can definitely say we’ve made tattoo culture more popular in the German-speaking world.”

One hundred tattoo artists have registered to attend the event, including star tattooists from Australia and Japan.

Sideshow performers such as America’s The Enigma, who is performing in Europe for the first time in ten years, Zombie Boy and the Mexican Vampire Woman are sure to draw the crowds.

For Auer, seeing The Enigma again will be a particular highlight. “The Enigma, or Puzzleman, is one of the icons of the global tattoo scene. He has a full body tattoo and he also kicked off the body modification scene by having artificial horns made of Teflon implanted in his head. He’s a real rock star of the body cult scene and is one of the best sword swallowers worldwide. His breathtaking show is unique and spectacular.”

The Mexican Vampire Woman also has a fascinating story. Mary Cristerna studied law and worked as a lawyer, but after being physically abused by her husband for many years she finally got divorced and began to turn herself into the Vampire Woman. She has four children, works as a model and tattooist, and is an activist against domestic violence.

Beyond tattoos and piercing, Wildstyle is a showcase for extravagant fashion, biker wear, club wear, Metal and Rockabilly style, custom bikes, airbrushing, and a spectacular show programme which features circus acts and The Modern Primitives Freakshow.