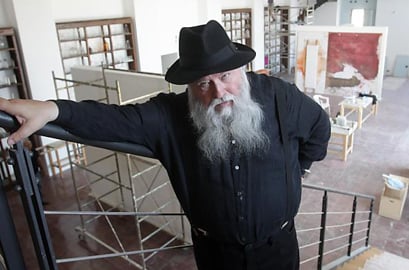 Hermann Nitsch, at a museum in Naples dedicated to his work. Photo: APA/HOCHMUTH

The movement emerged in the 1960s as part of the new performance-based art, which broke with the confines of traditional painting and used the body as both surface and site of art-making.

Vienna Actionism shied away from little – and sometimes landed the artists in jail.

"They sought a direct confrontation with reality, both physical and psychological, to limits that were very difficult to tolerate," said Eva Badura-Triska, curator of My Body is the Event at Vienna's Museum of Modern Art (Mumok).

The movement's main members were Otto Muehl, Hermann Nitsch, Günter Brus and Rudolf Schwarzkogler, who skinned animal carcasses, tied up human bodies or mixed them up with gore or mud.

Muehl, in particular, created a series of "still lifes" with body parts sticking out through planks, giving the impression of a dismembered corpse.

Brus once crisscrossed Vienna with his body painted white and bisected by a jagged black line before being arrested by the police. His other performances involved scatology or verged on pornography.

"Actionism broke away from traditional values. But it remains art. It is well-thought out, has a precise form and references," said Badura-Triska. "It's an extension of the field of painting, even though it is one of the most radical."

"They overturned the rules by considering as aesthetic things which were deemed ugly according to social norms," the curator added, conceding that the exhibition would be difficult to hold in certain countries.

The city of Sigmund Freud and other radical thinkers, Vienna already saw taboos broken in the early 20th century when artists like Gustav Klimt, Oskar Kokoschka and Egon Schiele shocked the world with sexually explicit artworks.

If the Vienna "Actionists" follow this spirit, a source for their non-conformity was also World War II, said Badura-Triska.

They lived "in a country where, unlike Germany, the Nazi past was pushed away, literally hidden in bourgeois normality, which helps explain their extreme reaction.

"In this respect, 'Actionism' had a cathartic effect. It allowed suppressed drives to be released in controlled fashion, in the context of artistic experience," the curator said.

The exhibition compares the Vienna movement with other developments in performance-based and action art, featuring a wide range of international artists from Yoko Ono to Marina Abramovic.

The movement at times took a heavy toll. During a filmed performance which also featured her husband, a nude and bound Ana Brus had a nervous breakdown.

Günter Brus, who publicly urinated, defecated and cut himself with a razor blade, held his last live performance in 1970 in which he appeared nude and drank his own urine.

But Hermann Nitsch, 76, is still performing and has at least three museums devoted to his work in Austria and in Naples, Italy.

Otto Muehl died in 2013 at the age of 87 after being sentenced to seven years in jail on charges of sexual offences with minors and rapes committed in a commune he had founded.

The movement, which was little known in the 1960s, received a boost two decades later with a series of exhibitions in Cologne, Vienna, Paris and Los Angeles.

The exhibition at the Mumok runs until August 23rd.