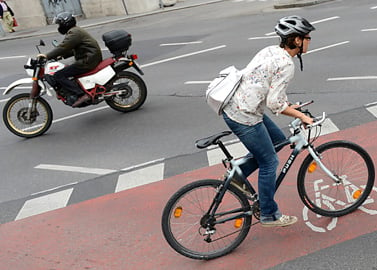 Vienna has a good network of cycling lanes. Photo: APA/FOHRINGER

The ‘Sootfree Cities’ ranking gave Vienna an overall score of 84 percent, noting its high share of parks and green zones, well-developed public transport system, and promotion of cycling and walking as alternative ways of getting around.

Since 2012 an annual travel card for Vienna’s public transport costs just €365 per year, far below the European average of €660.

Zurich, Switzerland’s largest city, came top of the ranking for its commitment to cutting pollution from vehicles, for promoting cleaner forms of transport and for its low levels of pollution.

Copenhagen in Denmark was in second place, with Stockholm and Berlin behind Vienna in fourth and fifth place.

Luxembourg, with one of the highest percentages of car users in the European Union, got the worst evaluation, just ahead of Lisbon and Rome.

European cities were evaluated in nine transport-related categories including the promotion of sustainable transport, traffic management, and public procurement and economic incentives, such as congestion charges and parking.

“Although 90% of Europeans living in cities today are still breathing unhealthy air, Copenhagen, Stockholm, Vienna or Berlin have either met, or are due to meet, the EU limit values within the next two years. Zurich has already progressed well beyond the EU’s norms,” said Arne Fellermann, Transport Policy Officer at BUND/Friends of the Earth Germany.

The EEB called for greater effort to cut pollution in Europe’s biggest cities.

“The EU must be more ambitious if it wants to prevent repeats of last week’s deadly smog,” EEB spokeswoman Louise Duprez said, referring to the recent high pollution levels in Paris and other cities.

Air pollution causes nearly half a million premature deaths each year in the EU and the average life expectancy of residents in the most polluted cities is reduced by two years as a result, the EEB said.

For a look at the full rankings, check here.