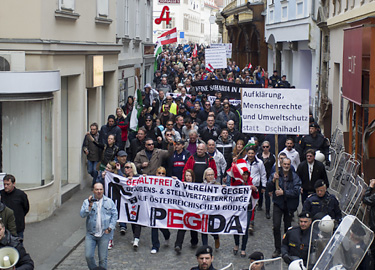 A counter-demonstration organised by Offensive gegen Rechts far outnumbered the Pegida supporters, with around 1,000 people according to police estimates.

The Pegida march made its way from Karmeliterplatz to Freiheitsplatz, which police had cordoned off.

The Offensive gegen Rechts group gathered on Griesplatz two hours before the Pegida march kicked off, holding banners with slogans such as “Racism has many faces, but they are all ugly,” “There is no right to Nazi-propaganda”, and "Nazis secretly eat Döner".

They had told police they would march to Sudtirolerplatz, but changed direction midway and tried to gain access to Freiheitsplatz. There were scuffles between the two groups, with plastic bottles and some small firecrackers being thrown.

Police set up barriers and by 5:00 pm both demonstrations had dispersed.

Pegida spokesman Werner Wirth told the crowd that he had expected more support but that “the fascist mob had blocked their way”.  “There is nothing as intolerant as Islam,” seemed to be the main message of his speech.

Michael Stürzenberger and Edwin Utrecht had been invited from Germany as guest speakers but they were almost drowned out by the noise of protesters.

FPÖ politician Susanne Winter was seen in the crowd. In 2009, she was sentenced to a €24,000 fine for incitement and denigration of religious teachings, after making derogatory remarks about Islam.

Wirth said that at the next Pegida march in Graz, former far-right Austrian politician Ewald Stadler would be a special guest. He has previously said he would offer legal advice to Pegida members in Germany and Austria.