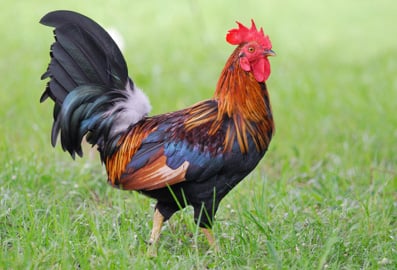 The pensioner, who was in his garden at the time, was struck in the hand and right kneecap by the pellets.

When the 54-year-old realised what he had done he tried to flee from the scene in his car but was tracked down by two police helicopters and arrested by armed police a short while later.

He had taken his air rifle to a parking lot outside his house and shot in the direction of his neighbour’s barn, where the chickens were kept. His neighbour was in the garden emptying a compost bucket.

"The 81-year-old felt a burning sensation and then realised that he was bleeding," district police commander Klaus Innerwinkler told the Austria Press Agency. A witness who had seen the incident called an ambulance and the police.

The 54-year-old shooter has been given a temporary weapons ban and police have confiscated all of his guns.

The injured chicken owner was flown by helicopter to hospital in Klagenfurt. The cockerel was unharmed.