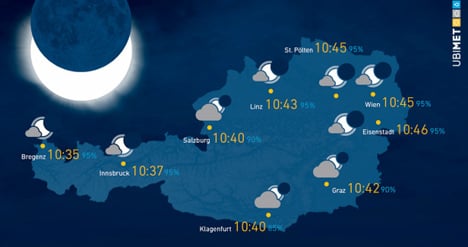 "The sky across the majority of Austria is almost cloudless," meteorologist Albert Sudy said. Only Carinthia and southern Styria may see some cloud coverage which could obstruct the view.

Experts are warning people not to look directly at the Sun because it could cause serious harm.

As it is not a total eclipse, the effect will be much more gradual than an end-of-the-world plunge into darkness.

The exact moment of greatest darkness for Austrian skywatchers will be dependent on the location.

The west of Austria will see the partial eclipse first, with the shadow first appearing in Bregenz at around 9:27 am, and at its maximum by 10:35 am.

The further east you are in Austria, the longer you will have to wait. The maximum shadow in Vienna will be at 10:45 am.

The period of greatest darkness – nearly three minutes – will occur over a spot in the Norwegian Sea, a little below the Arctic Circle, at 10:46 CET.

Many professional and amateur astronomers have travelled to the Faroe Islands, where the capital city of Torshavn gets totality for a full two minutes, beginning just before 10:41.

The next partial eclipse to be visible in Austria won't be until June 10th, 2021.