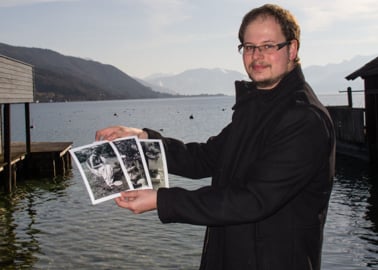 Pharmacist and professional photographer Wolfgang Kühn found the camera on sale in a flea market in Seewalchen am Attersee and once he took it home, was amazed to see that it still contained an old film.

“I've bought myself a historical Voigtlander camera and discovered upon opening it that a roll of film was still inside. I immediately closed the camera again, then developed the film,” he said.

“The film had been in the camera for 50 years. It was exciting to find out whether the latent images, as they are called, had lasted those five decades.”

Kühn said: “I would like to know who these people were. The furniture and clothing would suggest the photos were taken in the sixties.”

Posting his discovery onto Facebook, he has reached out to people to help him track down the people in the photographs, or their relatives, so the images can be handed back to their rightful owner.

“Now I would like to use the power of the internet to find the people in the images,” he posted on Facebook.

One of the images Kühn developed.

Update: one of the people in the photos has been found!