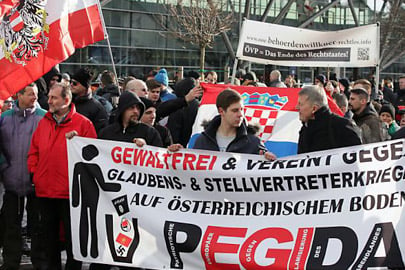 Sympathisers of the German "anti-Islamisation" group were caught on camera yelling the Hitler slogan and other actions that contravene Austria’s anti-Nazi laws.

Police spokesman Roman Hahslinger said that some suspects were also seen performing the Hitler salute, or other gestures associated with the Nazis during last month’s demonstration in Vienna.

He added that the suspects, captured in photos and on videos, have yet to be identified.

As many as 25,000 supporters of the Patriotic Europeans against the Islamization of the West turned out in German cities last year. In Vienna, the demonstration attracted only about 200 people, who were dwarfed by a gathering of left-wing counter demonstrators.

Hahslinger said that there would also be some charges for assault, after clashes between right and left-wing demonstrators.

Some of those who took part in the Pegida march are believed to have links to the far-right football hooligan scene.