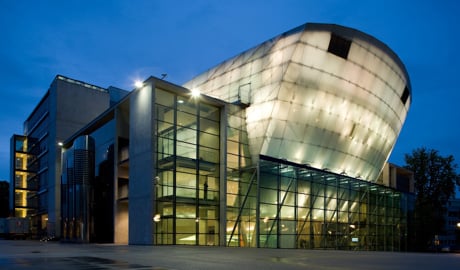 The Festspielhaus St. Pölten was affected by the threat. Photo: st-poelten.gv.at

The KIJUBU book festival should have taken place from March 10th to 15th but police decided the risk of a possible attack was too great, and advised organizers to cancel it.

A handwritten letter was received by one of the participating schools on Monday afternoon, festival organizer Brigitte Schlögl told the Austria Press Agency.

Thomas Heinreichsberger, from Lower Austria Police, said they took the threat “very seriously”. “The writer knew the exact locations for the possible attack,” he added.

He said police did not believe the threat had anything to do with Islamic extremists.

Police consulted the festival directors, who decided it was wiser to cancel the whole event rather than having to organize large-scale security measures.

The Lower Austrian National Library, regional Museum and the Festspielhaus St. Pölten were all affected by the threat, and now have an increased police presence.

"We immediately arranged for all necessary safety precautions to be made," Heinreichsberger said. Police are continuing to investigate.

The book festival attracts around 5,000 children and young people every year. It holds readings, workshops and invites popular children's authors.