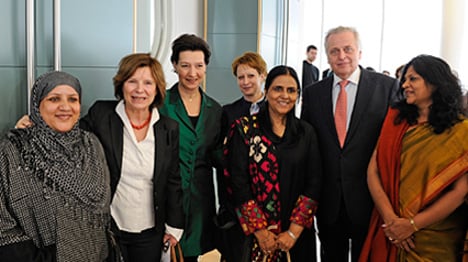 Schlaffer, second from left, with ministers and leaders of Mothers Schools from Kashmir, Pakistan and India. Photo: Regina Aigner/BKA

The Mothers Schools Against Extremism model was developed by Vienna-based advocacy group Women Without Borders and is designed to act as “an early warning system” so that mothers feel able to protect their children from radical influences.

"The first line of defence is at home, this is where the first signs of a possible radicalization become visible," Edit Schlaffer, founder of Women Without Borders, said on Monday. She said it was about addressing an “imbalance in society” and “helping young people who don’t manage to find a direction”.

She added that work had been done to focus on particular schools and areas in Austria where conflicts had arisen and to identify concerned parents.

The first group will start with about 15 mothers who will take part in workshops with specially trained coaches over a period of three to four months, where they will learn techniques to help detect potential radicalization and also develop a constructive dialogue with their children.

"We’re not just talking about mothers of jihadists, we’re talking about all anxious mothers and fathers," Schlaffer said. She added that at recent information evenings, many fathers had also expressed interest in becoming part of such a network.

"Mothers Schools help women become more proactive, they learn to communicate better with their children and how to ask questions without controlling them. They develop self-confidence and a sense of dignity and don’t worry about asking their children what is going on in their lives,” Archana Kapoor, who set up Mothers Schools in India and Kashmir told a press conference in Vienna.

She added that the seminars run by the network offer mothers an important space in which to share their experiences, and find like-minded women.

Social Minister Rudolf Hundstorfer (SPÖ), who is supporting the project, said that education and prevention work was key to protecting young people in Austria from extremist influences. He said he was convinced that parents, and especially mothers, had a central role to play. "We have to try and reach young people before they are recruited. In Austria it is only a minority, but any teenager who becomes radicalized is one too many," Hundstorfer said.

Government estimates suggest that around 200 people from Austria – including women and minors – have gone to Syria and Iraq to join jihadist militias like Islamic Front.

Alev Korun, human rights spokeswoman for the Green Party, welcomed the Mothers Schools project: "I'm very pleased that the government is supporting this project which focuses on social and community cohesion, and aims to support the parents of at-risk youth."