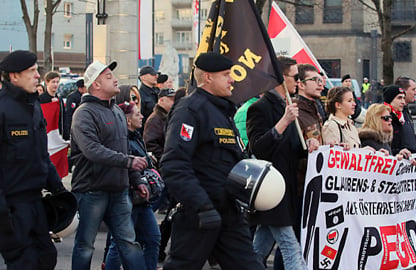 The cost of the police operation is estimated to come to more than €250,000, the Kronen Zeitung reports.

The Pegida rally of around 100 people was dwarfed by a counter-demonstration of some 1,800 people, marching under the slogan “no metre for Pegida” and with shouts of “Nazis out”. The Austrian Press Agency reports that a press photographer who was suspected of having “Nazi” sympathies was attacked by several people.

Pegida supporters marched under the slogan “Cowardice means there is no debate”. Ignaz Bearth, head of the Swiss Direct Democracy Party, which has links to France's Front National party, made a speech saying that “the barrel is overflowing" in regards to the spread of Islam in Europe.

Left and right-wing demonstrators marched from the main square to the main train station – with police fearing the prospects of riots. Half the city was sealed off and many shops had to close.

"This is bad for business – many people are complaining about it. When there’s a demonstration people make a wide berth around the city centre and avoid going shopping – they think it’s too dangerous,” the head of Linz’s city centre trade association Werner Prödl said.

State police said they had no choice but to approve the protest – even if they would have preferred to ban it. "The right to demonstrate is protected by the constitution," a police statement said.