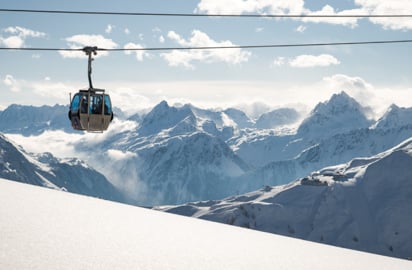 On Tuesday four skiers suffered serious injuries after colliding with other skiers. In three of the cases the skier who had caused the accident sped off without leaving their details.

“Whoever skis away from an accident and doesn’t leave their details will be treated in the same way as a hit and run,” Vorarlberg police told the Austrian Press Agency.

In the Warth skiing area a 49-year-old woman was run into by another skier as she was helping her young daughter stand up after a fall. She suffered a broken rib. The woman who had caused the collision helped the injured skier get up but then skied off without leaving her name or number.

A 33-year-old skier in Warth was rammed from behind just before she reached the edge of the piste, and broke her collarbone. Again, the skier at fault helped her up but then sped off.

“Even in a skiing accident – you must provide assistance and leave your contact details,” police spokeswoman Susanne Dilp said. She added that often it was hard to tell how badly injured someone was, and that it was a serious offence to leave an injured skier on the piste.

Hans Schrammel, a mayor from Burgenland, was recently injured in a collision in Hochkar, Tyrol. A skier who is believed to be a tourist crashed into him, and after telling him in English that she was “fine”, she sped off leaving him with a fractured shoulder and six broken ribs. Police are looking for the woman.