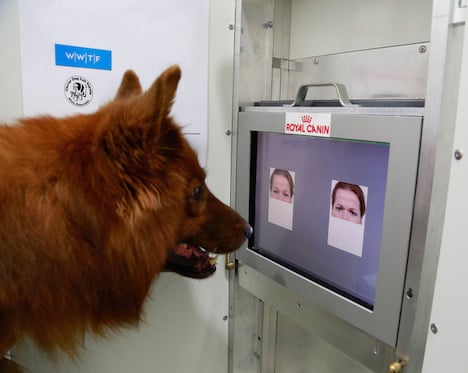 In a study published in the scientific journal Current Biology, dogs were presented with a touch screen depicting photographs of human faces showing anger and happiness, and were rewarded for identifying the differences.

Biologist Corsin Müller and his colleagues tested 11 dogs – including border collies, a fox terrier, a golden retriever, a German shepherd and a few mutts – by giving them treats when they correctly identified a happy face or an angry face on the touch-screen computer.

They refined the test by also showing only the top or bottom half of the face, to better isolate the emotional response.

After the training was complete, the dogs were then given a series of choice trials, where they had to pick between strange faces with either happy or angry expressions.

Interestingly, dogs took longer to identify angry faces, as if reluctant.  Researchers thought this could be because dogs with experience of anger or happiness knew that a happy human was more fun to be around.

Researchers raised the question of whether their ability to differentiate between basic emotions is the result of their past experience, or genetically inherent as a result of domestication.

Whatever the reason, it's not so surprising that dogs can tell facial expressions apart, Müller says. "Because they spend so much time with humans, they have a lot of opportunities to see human expressions."

A brief abstract of the study says that "Müller et al. demonstrate that pet dogs can discriminate emotional expressions in human faces. With an innovative paradigm, they can rule out that discrimination was based on simple cues, such as the visibility of teeth. Their study provides the first solid evidence for the ability of a non-human animal to discriminate emotions of another species."