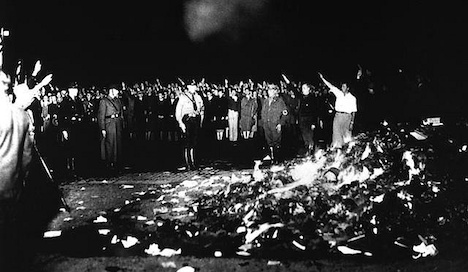 The plaque on a church recalling the first public burning of books following the Nazi annexation of Austria was "daubed with a tar-like substance," police spokesman Michael Rausch told AFP.

The memorial, mounted in 2011, includes the famous quote by German poet Heinrich Heine (1797-1856): "That was only a prelude — When you burn books, ultimately you will also burn people".

In the past two years there have been a spate of similar incidents of vandalism in Salzburg in western Austria believed to have been carried out by neo-Nazis.

This has included around 60 cases of plaques in the pavement — so-called "Stolpersteine" ("stumbling stones") — that contain the names of Jews murdered by the Nazis being defaced.

Last month two men aged 21 and 22 were sentenced to five years and four years respectively in prison for the "Stolpersteine" vandalism, but other incidents have gone unsolved.

In January 2014 vandals painted yellow a Star of David symbol outside Salzburg's synagogue. Under the Nazis Jews were forced to wear yellow stars.

And in May 2014 glass on a monument to around 500 mentally ill patients from Salzburg killed by the Nazis was smashed. Three people were charged last week over the incident.

The same month the letters "KZ" — short for "Konzentrationslager" ("concentration camp") — was sprayed on a wall outside a shelter for the homeless.

Away from Salzburg, last week four swastikas were found daubed or etched on walls at the former Nazi concentration camp Mauthausen, as well as the word "Hitler" in small letters.

On Sunday the northern city of Linz was due to hold its first Pegida march, with police predicting around 300 participants, while some 1,000 people were expected at a counter-demo.