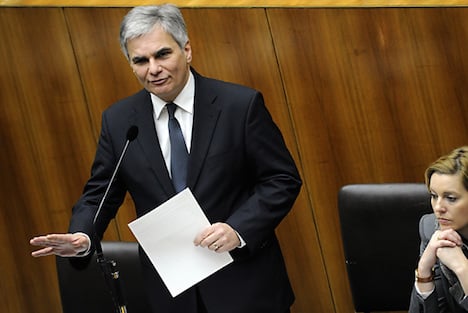 "I do not believe military action is the way to resolve conflict. I am opposed to sending arms," Faymann told the Kurier daily in an interview.

Calls have been growing in some quarters, notably in the United States, to arm Kiev's Western-backed government following a recent upsurge in fighting in which pro-Russian rebels have appeared to gain the upper hand.

"I can't conceive of a situation where better armaments for the Ukrainian army would so impress President Putin that he believes he will militarily lose," Merkel told the Munich Security Conference.

Faymann also expressed scepticism about the European Union imposing new sanctions on Russia ahead of a summit of EU leaders in Brussels next week.

"In my opinion sanctions are a vicious circle difficult to get out of. In the short and medium term they achieve little or nothing at all … I would like to put the focus on peace talks," he said.

The EU "needs to show Putin that it is interested in a fair cooperation, provided that certain rules, such as accepting the sovereign rights (of other countries), are adhered to," Faymann said.

"We should not be building more walls but tearing them down," he said.