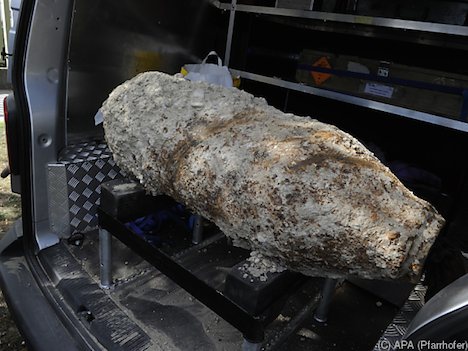 A similar 250 kg bomb was found in Floridsdorf in August 2014. Photo: APA (Pfarrhofer)

The bomb disposal squad of the Federal Army is working to make safe a 250 kg bomb found during construction.

Update: the bomb was destroyed in a controlled demolition at 13:00. The operation was completed safely, leaving a crater among the trees in a wooded area.

Around noon, a large area around the find was cordoned off.  Police spokesman Thomas Keiblinger said "More than 100 officers are on duty."

The disposal procedure is expected to be completed around 1 p.m.

A similar 250 kg bomb also dating back to the Second World War was found in nearby Floridsdorf in August 2014.

A picture of the bomb has been released by police.