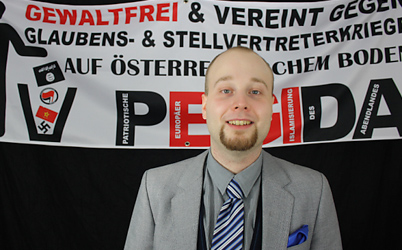 Georg Immanuel Nagel (28) told the Austrian Press Agency (APA) that Pegida marches would continue in Austria, but that the establishment of an official association was “still in the planning stage”.

More than 300 Pegida supporters (Patriots Against the Islamisation of the West) marched in Vienna on Monday evening, but they were dwarfed by a colourful counter-demonstration more than ten times larger, according to police estimates.

Police are examining video footage and photos from Austria’s first Pegida march, after some supporters were seen performing Nazi salutes.

Nagel, who is a student, sought to distance himself from any right-wing extremists, saying that “even if some real idiots managed to sneak in, they did not diminish the success of the march”.

He added that it was “the largest patriotic demonstration in decades” and felt that it was in the tradition of a bourgeois revolution – comparing it to the Vienna uprising of 1848.

In a written statement sent to APA he said that he had succeeded in generating media attention around Austria's first Pegida march, and that his work was now done. He also admitted having been “pretty clumsy” as a spokesman.

On Wednesday images of him allegedly wearing a pink plush outfit at a sado-masochist fetish party were printed in some of the Austrian tabloids, as well as information about articles he has written which reportedly incited hatred against foreigners.

A second Pegida march is planned in Linz, Upper Austria, on February 8th.

Meanwhile, a study from the Technische Universität (TU) Dresden has found that around a third of Pegida members in Germany are “far-right nationalist xenophobes”.

From The Local Germany: What exactly is Pegida?