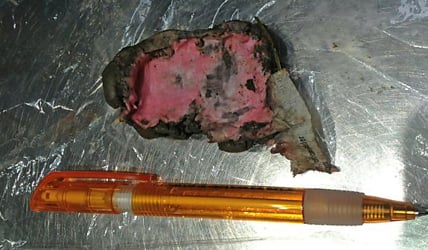 A piece of the poisoned meat. Photo: Lower Austrian Police

All four dogs survived but suffered “a lot of pain and agony”, a local vet said.

The dogs were poisoned between December 25th and January 26th. Police are investigating and could charge the perpetrator with animal cruelty.

They have asked anybody with information to call them on 059133-3232 and have advised dog owners not to let their pets off the leash or leave them unattended.

The first victim was a Labrador, who was being walked by her owner in the woods. After eating the poisoned meat she had to be treated by a vet for several weeks, at a cost of €4,000.

A second Labrador and a mongrel also fell ill after eating meat left in a local street, Dr.-Niedermayr-Gasse, between January 20th and 26th. On January 22nd police got an anonymous tip-off and found poisoned bait outside the Aura Park residential complex.