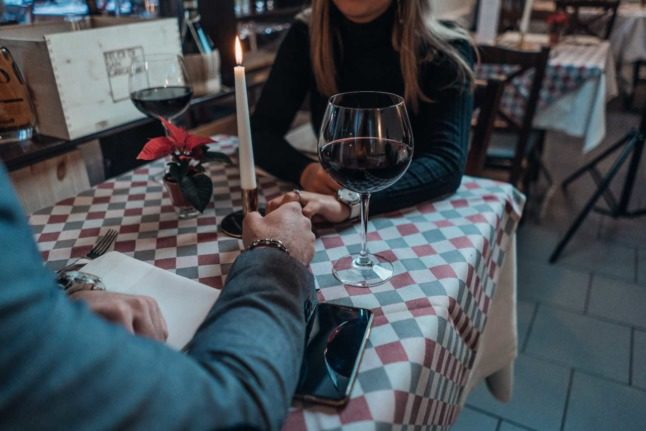 A couple hold hands as they share dinner and a glass of wine in Austria. Photo by René Ranisch on Unsplash

Discounting some of the more bitter responses – “weird and psychotic” or “hard work and volatile” we have put together a list of nine things which might help you understand the Austrian psyche before you embark on a date.

This is maybe why so many of you have told us that it’s hard to meet an Austrian in the first place.

One French reader, Valerie, says Austrian men don’t know the first thing about seduction, and she misses flirtation and men making eye contact with her on the street. Plus, Austrians tend to be…

Shy and not that good at flirting

Katia Farias, a Brazilian journalist and blogger who lives in Vienna and has been married to an Austrian for five years says he is “funny, loyal, and kind” but warns that it may take some perseverance to snag your Austrian man as they are hopeless at flirting and tend to give off an “I’m not interested” signal.

This, she says, is the opposite of Brazilian men, who are pros at flirting but tend to be macho and unfaithful. This is where it can be handy to learn some German – Austrians often don’t want to look stupid and may be shy about speaking English – so learning a few cheesy chat up lines like “Ich möchte dich nicht dumm anmachen, aber ich hätte nichts dagegen, wenn du es tust” could be a game changer.

At ease with public displays of affection

But once you’ve met your Austrian, it seems they won’t be embarrassed about kissing and cuddling you in public. (And this can seem a little strange, or wonderful, to people from more reserved cultures, like the UK, where excessive PDA tends to be frowned upon.)

Despite that initial shyness apparently Austrians are more willing than some more conservative cultures to move on from the kissing and the cuddling and into the bedroom.

With less stigma surrounding one night stands – particularly for women – you might be surprised when this initial shyness turns to lust.

That outfit makes your bum look big. That haircut wasn’t a good idea. Your constant whinging isn’t fun for those around you.

Don’t worry, your Austrian partner is likely to tell you this in no uncertain terms.

While the honesty can be difficult to stomach early on, ultimately it is for your own good. Several readers have told us this honesty is rather refreshing.

Could well be a smoker

Statistics show that Austria has a high rate of smokers, especially among younger women, and only two in five smokers have tried to quit the habit. “It’s hard to meet a girl here who doesn’t smoke like a chimney. As a former smoker, it’s a real turn-off”, says Brit Chris.

At least that is what some of you have said, including Indian expat Dhruti, despite that fact that she is engaged to an Austrian.

She feels that many Austrian men are afraid of long-term relationships and taking on the responsibility of a family – as well as the prospect of having to share their income with their spouse.

Other readers have told us that they’ve been surprised by just how long the dating phase lasts, with some being told not to use the words boyfriend or girlfriend even after six months.

Austrians tend to be well-educated and polite – and men like to be chivalrous, holding open doors for a woman and helping her with her coat. Most guys will want to pay for dinner on the first date… but take your purse with you just in case.

And last but not least the “Viennese Waltz”.

This type of Austrian comes with a health warning. We first heard about them from one of our readers, who we fear may have experienced a bad break-up recently: “They’re attractive, smart and funny… but if you bite the bait, oh boy! Yesterday they loved you, the next day they’re not interested, soon they’re pretending they can’t remember your name and then they’re cheating on you. Six months later they are back and crying that you are the love of their life.”

Ouch. However, we rather suspect this is a type of toxic relationship that exists in every culture. What do you think?

From our other editions:

If, on the other hand, you’re looking for love in another of The Local’s countries then we have plenty more tips for you.

The Local Norway: 12 tips on how to snag a Norwegian

The Local Germany: Five reasons you should date a German (and five not to)

The Local Italy: Five reasons to date an Italian (and five not to)

The Local Sweden: Five reasons to date a Swede (and five not to)