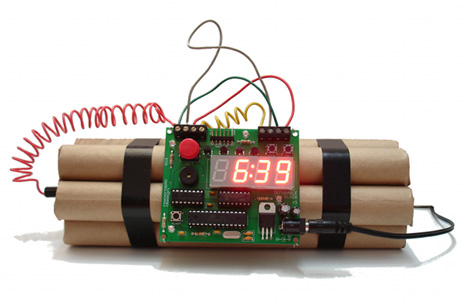 The threatening email, written in poor German, was sent to the newspaper editors on Thursday night saying that there was a bomb on the Streif Piste in Tyrol, the site of the current downhill ski races on the Hahnenkamm mountain.  The Streif is widely considered as the most demanding race course on the World Cup circuit.

The email said "We are Jihad Austria!  At the ski race in Streif there will be bomb! There will be deaths!  The Islamic State will let Austria burn!  Consequences will not be the same!"

Accompanying the email was an image of a circuit board, which was supposedly part of the bomb.

The editors forwarded the threatening email to police, who responded "This is probably just one of the many crazy people who jump on the threat-train currently."

In any case, however, the threat was taken seriously, as 20,000 fans were expected to watch the ski race.  Any panic caused by a bomb might have led to more deaths from a stampede.

According to police, the e-mail's author had some technical know-how, since the message was originally sent from a darknet server in Stockholm, which was accessed via The Onion Router (ToR) secure network, meaning the perpetrator is almost impossible to trace.