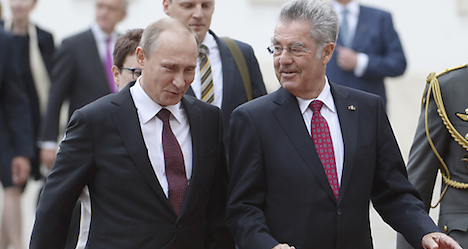 When discussing European politics – and especially issues like how to respond to Russia – little attention is usually paid to small European states like Austria. Germany, France, and Poland dominate the discussion, and the smaller countries are expected to follow suit; Visegrad countries are supposed to align with Poland, and Austria with Germany. But Hungary’s open flirtation with Putin’s authoritarian model and the rise of pro-Russian sentiment amongst Czech and Slovak politicians should serve as a warning that this paradigm has its limits.

Austria is no exception to this new club of Russlandversteher in Central Europe. Vienna was very sceptical of sectorial sanctions on Russia for fear of economic repercussions, and Austria was the first state after the annexation of Crimea to host Putin as an official guest. The warm reception he received as well as the signing of the contract to build the Austrian strand of South Stream showed that Russia will use economic and political vulnerabilities to try and subvert any common European policy.

This visit was very controversial in Austria, but there are still many people who promote the lifting of sanctions on Russia at the earliest possible opportunity. In December, the foreign minister ruled out further sanctions, despite the fact that Germany wanted to leave all options on the table to increase pressure on Moscow.

Austria’s reluctant stance on an assertive European policy is purely economic. Vienna imports about 70 percent of its gas from Russia. Furthermore, the state-owned energy company OMV invited Gazprom to invest in domestic infrastructure and hoped to become a Central European distributor of Russian gas. And Austrian banks and companies have invested heavily in Russia.

Vienna fears a collapse of the Russian market or retaliatory sanctions that could hit both the banking system and the state that would have to guarantee its survival. Last but not least, Russian tourists used to make up about 10 percent of total visitors to Austria, usually occupying the luxury part of the market.

Austrian feeling towards Russia is a strange mix of fear (hence the tendency not to provoke the Russian bear) and admiration for the fighting spirit of the perceived underdog being bashed by the West. Being a young member of the EU and outside of NATO, Austrians have little trust in European solidarity and are not used to the idea of a common European approach to deter Russian aggression. Austrian behaviour too often reflects the habits of a small, isolated, and neutral country trying to get along in between rival political blocs.

Moreover, Russia has not passed up the opportunity to meddle in Austrian domestic politics. The most obvious pro-Russian agent of influence is the right-wing Freedom Party (FPÖ). After a spell in government with the Conservative Party in 2000, the FPÖ was battered by infighting leaving it with just 11.7 percent of the vote and almost bankrupt after the 2006 elections.

But soon after, the party miraculously recovered and, going from being a secular nationalist party in the past, suddenly embraced Russia, Serbia and Orthodox Christianity as the main bulwark against Islamic migration and American liberalism. Since then, Russian diplomats and intelligence agents have frequently been present at FPÖ events and the party regularly invites Russian politicians and nationalist intellectuals to speak in Austria. In 2013, the party scored 20.5 percent of the vote and was able to aggressively push its agenda in public debates.

Mainstream parties are not immune to Russian influence either. President Fischer and Chancellor Feymann (both Social Democrats) threw their full political weight behind Putin’s visit to Vienna. The Austrian Social Democratic Party (SPÖ) is – with the exception of a small libertarian wing – much more left-wing than their German, Northern or Central European counterparts. Anti-Americanism and revanchist feelings towards the West are still strong amongst party cadres. Furthermore, after 2002 many second-tier FPÖ bureaucrats defected to the SPÖ and are now pushing a dedicated pro-Russian agenda.

After the German Social Democrats became increasingly aware of the nature of Putin’s regime, some of their pro-Russian cadres have been trying to influence the German-speaking debate via leftist institutions in Austria. Business interests and some large companies have considerable influence in the Conservative Party whose traditionalist, clerical-conservative circles were favourable towards Putin.

Then there are cultural factors that facilitate Russian influence in Austrian political and economic circles. Firstly, Austria is a consensus-oriented society where confrontation is usually avoided, even at the price of one’s own interests. Secondly, Austrians are kombinatorzy, always trying to outsmart their competitors. Thirdly, Austrian political culture is often perceived as non-transparent, based on personal bonds and favours, backdoor deals, and the sharing of benefits.

Legal provisions against corruption are improving, but a series of corruption scandals in the past suggested that there were considerable loopholes. This is an almost ideal operative environment for Gazprom and other Russian agents of influence. Vienna also hosts various international organisations which provide Russia with the opportunity to accredit large numbers of diplomats to Vienna. Few of them, however, actually work for these organisations, spending their time instead on “other” business.

Although many Austrians would favour a tougher line on Russia, politically they are neither strong nor united. Only one minor liberal party has adopted a firm pro-European position on Ukraine which has gone largely unnoticed in the political discourse. Foreign and European policy is not a defining aspect of people’s political or ideological affiliation. This is why pro-European, liberal or pro-Western forces can be found in all political parties (with the exception of the Freedom Party) and in all media and civil-society groups. But they do not join forces to push for a different political agenda.

In the past, Austria was a U-Boot – a submarine, but also an Austrian synonym for an invisible or disengaged actor – in terms of European politics, observing through the periscope where the European fleet was headed to, then surfacing in politically secure waters. However, Russia’s hybrid war in Ukraine has released political depth charges that could force this U-Boot to surface. So far Vienna has not dared to depart too far from the course set by Berlin. And as Germany asserts its new role in Europe and takes responsibility for Europe’s security, it will become more and more difficult for Austria to hide in its wake.

Russian policymakers sometimes flirt with the idea of a Central European pro-Russian coalition made up of Austria, Hungary, and Slovakia. Its chances are remote as each capital – regardless of the domestic rhetoric – gives way to pressure from bigger states and agrees with the common European line. Coordination between Central European governments is poor to non-existent, and sometimes the various ministries of each state work against one another.

Organising a revolt would be difficult to achieve. But the EU – especially Warsaw and Berlin – should pay closer attention to the increasingly vulnerable centre of Europe. The mixture of economic weakness and political confusion present in today’s Central Europe is a potential threat to European cohesion vis-a-vis Russia.

Gustav joined the ECFR Berlin Office as a Visiting Fellow on the Wider Europe Programme. Before joining the ECFR he worked as desk officer for international security policy and strategy in the Bureau for Security Policy in the Austrian Ministry of Defence from 2006 to 2014 and as a research fellow of the Commissioner for Strategic Studies in the Austrian MoD from 2003 to 2006. He also was committed as research fellow in the International Institute for Liberal Politics in Vienna. Before his academic career he served five years in the Austrian Armed Forces.

Gustav earned a Master Degree in political science at Salzburg University and is about to defend his PhD Thesis in Strategic Studies at the Faculty of Military sciences at the National University of Public Service, Budapest. He is author of numerous publications regarding security policy and strategic affairs.

Reprinted with kind permission from the European Council on Foreign Relations.

ENERGY
Air-con, ties and lights: How Europe plans to save energy and get through winter without blackouts
Url copied to clipboard!