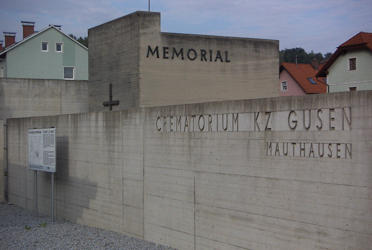 The small town, with a population of nearly 4,000, was the location of KZ Gusen II during World War II, one of the most brutal sub-camps of the Mauthausen-Gusen system.

However, he believes he also unearthed evidence of a secret underground atomic weapons programme.

The Nazis made their prisoners dig a vast network of tunnels under the camp – which may have been used for highly secretive nuclear weapons tests.

Sulzer also found blueprints that he says show additional, undiscovered chambers underground. The tunnels were later filled in and the entrance ways sealed.

Sulzer plans to release two films relating to Gusen in the coming year, which have been funded by the German state television network ZDF.

At least 71,000 people were interned in Gusen II, from 27 different nations. More than half were killed.

Sulzer has published documents about the Nazi’s construction activities, and has analysed aerial reconnaissance photographs and old Allied intelligence reports which suggest that there were many more tunnels and underground rooms than previously believed.

There have been suggestions that the soil at Gusen is contaminated with radioactivity, something mayor Erich Wahl is keen to prove is not the case, as the local council wants to build a housing estate on the site of the former camp.