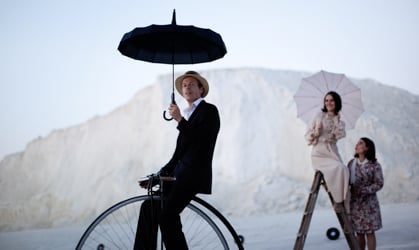 How did you end up moving from Germany to Austria?

I remember hiking in Austria as a teenager, on a high mountain with skis. I had just finished school and suddenly I had a vision of what I wanted to do – to make music. The Austrian music scene inspired me to come here – not the classical music of the past but the vibrant electronic music scene, artists like Kruder & Dorfmeister… And then later, when I moved to Vienna, I discovered the music of the Balkans, of Austria’s neighbours, and the music from the former lands of the Austro-Hungarian empire. I learnt the piano as a child and my background is jazz. I started to mix elements of swing and ragtime with the sounds of the Balkans. There were so many musicians I could work with here.

15 years on, how have things changed?

I now have a worldwide network of musicians I work with, but when I’m in Vienna I’m very much based at home with my wife and two children. The introduction of broadband internet had a huge influence on how I work now, suddenly I could search for new music and was constantly finding new sounds within minutes. Promoters and bookers find my music online and book me for concerts – so my music is really my travel and adventure agency – taking me all over the world. But I still love the flair of Vienna and it’s a great place to live and raise a family. It also has so much to offer in terms of music.

Cooking and spices are also a big part of your life, tell us more about that.

I learnt a lot about spices travelling around the world with my music. I began to create my own blends and recipes and when I release an EP or LP I create a special spice blend which is included with the CD or album. When I first arrived in Vienna the wonderful spice range at the Naschmarkt was a big inspiration for me. I use at least five different spices in every dish I cook, and sometimes as many as 30. It’s all about being creative and the taste experience – similar to when I make music. I always cook seasonal foods and quality is important for me. When I was in Spain I created a spice blend inspired by the local flavours and smells – including almonds, lavender and orange peel.

So we can look forward to a new spice blend with your new album?

Yes, Mountain Jumper. I’ve been working on it for the past six months and it’s a reflection of all the places I’ve visited in the past few years. It mixes so many sounds and cultures. One new element for me is Chinese music – fusing the Chinese lute and violin with the banjo and the Greek bouzouki. It’s like a huge melting pot with lots of different cultures coming together. I’m always looking for new colours and flavours for my music – the same as when I cook – something to make it more interesting and satisfying. It’s very important for me that I don’t get stuck in one genre, or pigeon-holed, I need to keep moving forward. Every song is recorded in a different studio, with different microphones and different musicians. For me, the album is like a big kitchen with lots of different dishes being created – it’s definitely not minimal!

And what’s next for you?

I’m working on a CD for children, it’s about a blackbird who sings in a tree every morning and then meets a gypsy boy who inspires her to travel the world, meeting different people and animals. Every single song will have a different style – and it will be music that parents can enjoy as well! I want to release it in German, English and Spanish.

Dunkelbunt’s new album, Mountain Jumper, will be released on March 9th. You can see him perform live on January 29th, at the Gasometer in Vienna. More info check the Facebook event page.

PARTNER CONTENT
How to work 9-5 and travel the rest of the time
Url copied to clipboard!