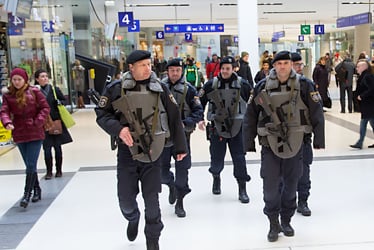 A cleaner found the note in a rubbish bin on an empty Meridian train, that was travelling between Salzburg and Munich.

Police cordoned off the area around the platform and trains were stopped from entering the station.

The affected train service was suspended for two hours.

The all clear was finally given at 8.30pm, and the train was able to travel on to Munich that evening.

"We deployed explosives experts and sniffer dogs. The dustbin in question was opened and we did find some documents, but thank God there wasn’t a bomb. But it’s certainly not a joke to even threaten such a thing," the head of Salzburg police, Andreas Huber said.

Police are hoping that video footage from the train and DNA from the note may lead them to the perpetrator.

Twenty train services were affected and passengers had to reckon with delays of up to one and a half hours.