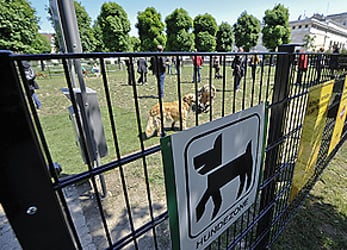 Dogs are only allowed off the leash in the city in designated 'dog zones'. Photo: wien.gv

The man, a construction worker, was walking home with his Labradoodle on November 25th last year when two policemen noticed that the dog was not on the lead. They tried to stop him and fine him but he ignored them and ran away, one of the policemen told the court.

The officers pursued the man on foot. When they caught up with him he insulted them, threatened to kill them, and attempted to punch them, the 45-year-old officer said in his testimony.

The officer said he was forced to defend himself and punched the dog owner, who finally fell to the ground, but continued to try and attack the two officers, who had to handcuff him. "It was a tough fight, but he seemed completely insensitive to pain," the officer said.

The accused however claims that he was knocked down by the policeman with a blow from behind and was kicked and punched several times as he lay on the ground. He said that one officer kneeled on his chest and held his hands, whilst the other attacked him. “They beat me unconscious,” he said. “When I came to I was handcuffed to a railing”.

A judge noticed that the man had severe bruising around his left eye when he was in pretrial custody – and called for an investigation into the arresting officers.

An eyewitness who was passing by at the time of the arrest told the court that “the man was not beaten by the police, but fought back and fiercely resisted arrest”.

The second officer who took part in the arrest is currently on holiday and a judgement is not expected until January 28th. The accused has been ordered to stay in custody until then.

The law requires dogs to be kept on a leash in public areas in Vienna, and they must wear a muzzle on all forms of public transport.