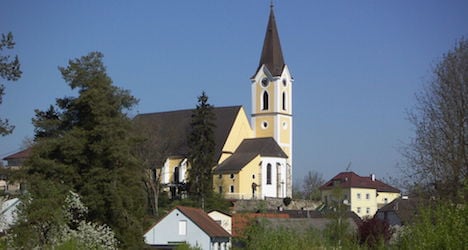 The town was the location for Gusen 2 during the Second World War, one of the most brutal sub-camps of the Mauthausen-Gusen system.

It managed slave labour for quarries and was the industrial base for DEST (Deutsche Erd- und Steinwerke GmbH), which was an SS company formed to procure building materials for Germany.

The Upper Austria Bezirksrundschau newspaper reported on Tuesday that the local council plans to build 136 new homes, starting in spring.

Opposition activists have started a petition under the slogan "No flats at the gates of hell", arguing that it is inappropriate to use a location with such historical significance for new housing. Within a few days, the petition had attracted 500 signatures.

The chairwoman of the Gusen Memorial Committee, Martha Gammer, points to "many new facts" which have arisen in the course of research by the filmmaker Andreas Sulzer.

Sulzer has suggested there may have been nuclear tests by the Nazis in the tunnels of the former concentration camp, which he learned of while looking for evidence of the existence of the largest underground Nazi armaments manufacturer, known as project Bergkristall.

Gammer has called for an examination of the soil, to detect possible radioactivity.

Sulzer plans to release two films relating to Gusen in the coming year. In the concentration camp, a satellite camp of Mauthausen, at least 71,000 people were interned from 27 different nations, of whom more than half were killed.
The Bergkristall project was responsible for some of the worst atrocities.  The construction of an eight-kilometre-long tunnel system for underground aircraft production cost more than 8,600 detainees their lives.
A majority of the underground passages have now been filled for safety reasons.
"In 1968 there was an exploration conducted by the then mayor. He found there were rooms deep under the earth, of which the entrances are unknown," Gammer told the newspaper.
In addition, attempts to drill water wells at the site were blocked at a depth of 19.5 metres by huge iron plates.
Local mayor Erich Wahl of the Social Democrats (SPÖ) contradicts these allegations vehemently.
"The story about the big metal plates is simply not true. The suggestion that there was an exploration in 1968 is entirely fictitious", he asserted.
Meanwhile in Germany, another controversy has started after a town proposed that asylum seekers could be housed in a former concentration camp in that country.