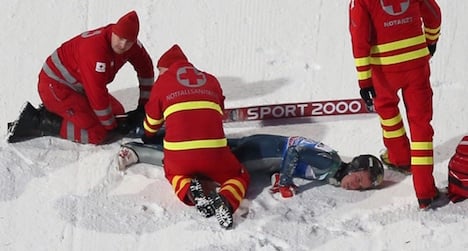 Fairall, a member of the USA Ski Jumping team and a 2014 Sochi Olympian, was taken to hospital where he underwent extensive emergency spinal surgery to stabilize his injuries.

Fairall is a two-time US National Champion and has 20 World Cup starts. He was the top American in the large hill at the Sochi Games, finishing 35th. He is not expected to return for the remainder of the 2015 season.

"I understand Nick is out of surgery and is in good spirits. Coach Bine Norcic and teammate Nick Alexander are with him now at the hospital. Nick is one of the most friendly and supportive athletes on the USASJ team. He’s always the first person to lend a hand or offer words of encouragement to his teammates,” USA Ski Jumping Board Chairman Rex Bell said.

“I know I speak for the whole US ski jumping and nordic combined community when I wish Nick a speedy and full recovery from his injuries."

The day after his crash landing Fairall showed his sense of humour by tweeting "Haha, I'm not dead yet !!" He thanked his fans for their support: "It was very emotional for me to see the support from fans, family and friends. Thank you so much."

He also tweeted a photo from the hospital bed where he gives a thumbs-up. In the background, his race number 21 is visible. "I look forward to a great year and will inform you about news soon," he wrote.

During his qualification jump on the Paul Ausserleitner hill, Fairall lost control immediately after landing and crashed with full force headlong into the snow.