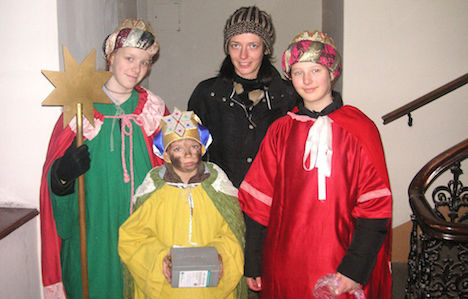 The arrival of the Three Wise Men symbolizes the tradition of the manifestation of Christ to the Gentiles, as represented by the Magi. Known in the English-speaking world as Epiphany, the holiday is celebrated in Austria with singing and graffiti.

Specifically, the initials of the three kings – Kaspar, Melchior and Balthazar – are written in chalk above the doorway of houses, in return for a small donation to a designated charity.

Catholic children dress as the three wise men, one of whom is presumed to come from Africa, and therefore blackface is worn.  This usually isn't considered racist in Austria, but is rather thought to be a quaint religious tradition. For Orthodox believers, January 6th is also Christmas eve.  This is based on the fact that Orthodox Christians use a different calendar.

Archimandrite Christopher Calin, dean of the Russian Orthodox Cathedral of the Holy Virgin Protection, explained why so many Orthodox churches celebrate Christmas later than most other people.

“The majority of the Orthodox churches worldwide use the Julian calendar, created under the reign of Julius Caesar in 45 BC, and have not adopted the Gregorian calendar, proposed by Latin Pope Gregory of Rome in 1582,” said Calin.

There are 13 days in difference between the two calendars, the Gregorian calendar being the one long adopted by Western nations.