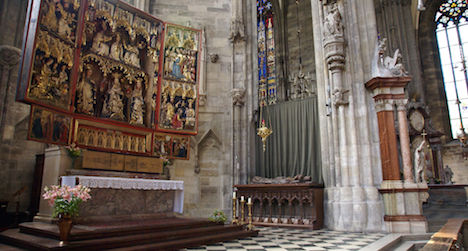 The vocational school in Mariahilf was winding down, and preparing for its Christmas break. The teacher of a class with 23 students carefully planned a school trip to visit Vienna's central St. Stephen's cathedral, so that the students could enjoy looking at the decorations, the Christmas market and the beautiful interior of the church which is visited by thousands of tourists every day.

The unnamed vice-principal of the school had other plans, however. He informed the teacher that the school trip was cancelled, because ten of the 23 students were Muslim, and therefore he was worried that they might misbehave, and tear down the crosses inside the Gothic cathedral.

According to a report in the Turkish journal Haber, all of the students were very angry and indignant at the decision, condemning it as "borderline racist".

In a joint initiative, the Muslim and non-Muslim students of the class wrote a letter of complaint to the school inspector, saying their trip was cancelled because of a belief that "Muslim students could damage the cross".

One of the Turkish born students, Cevat T., told the Kurier newspaper that all of the students and their teacher were gutted by the decision. "We were devastated", he said.

The students demanded an explanation in their joint declaration, asking why the school trip was cancelled, and whether racism or Islamophobia was a factor.

According to the Kurier newspaper, on Monday the school board responded, saying that it had begun an investigation into the incident.

The president of the City School Board Susanne Brandsteidl said: "We are looking into the matter. If true, this would be totally unacceptable." She went on to say that disciplinary consequences are conceivable.

The Catholic Youth (KJ) organization also released a statement.  Its chairman, Theresa Aumann, speaks of a "shocking decision" by the deputy headmaster.
In the interest of interreligious dialogue, the KJ has invited students from the vocational school on a guided tour of the cathedral.