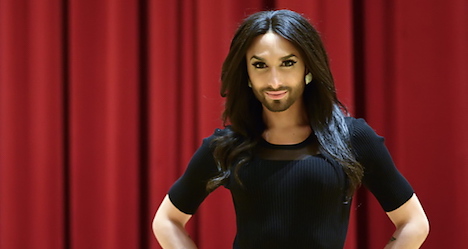 In the interview, the bearded drag artist and winner of 2014's Eurovision Song Contest said that she would like to visit Russia in the near future, and would jump at the chance to spend time with the country's autocratic ruler.

“What does it mean to be Vladimir Putin? What pressure is he under?” she wondered. “At the end of the day, Putin just wants to be respected. This desire for respect unites Putin with minorities.”

Thomas Neuwirth, who is gay, has said that when speaking about himself he uses male pronouns – but when discussing his stage alter-ego, Conchita, he prefers female pronouns.  The singer has even crafted a fictional backstory for the character: Conchita was born in the Colombian mountains and has married a French burlesque dancer.
Neuwirth explained he has many fans in Russia. “This is incredibly beautiful because it shows me that many Russians do not agree with the decisions of their government." "We oppose bearded men in dresses", say these members of the Russian Orthodox Church.  Photo: Orthodox Church
Russia is widely known for its homophobia and draconian laws outlawing the promulgation of homosexual propaganda among its young people.  The anti-gay St. Petersburg legislator Vitaly Milonov sent a request to Russia’s Culture Ministry, hoping to ban Wurst from performing in Moscow.

Putin's press secretary Dmitry Peskov reportedly said that a meeting between Wurst and Putin would be impossible at this time.

In May, Russian lawmakers proposed creating their own "straight" version of Eurovision after Europe's premier song competition was won by the bearded Austrian drag queen who promotes gay rights.

Lawmakers in the Kremlin-controlled parliament picked up on swelling outrage in the socially conservative country at Conchita Wurst's triumph by proposing a Russian-based contest in which family values prevail.

"We must leave this competition. We cannot tolerate this endless madness."

Rashkin said he would push for the creation of a "Voice of Eurasia" songfest instead, which would primarily group nations from the former Soviet Union.