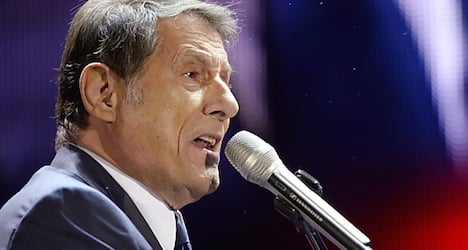 The "schlager" superstar's death from heart failure was the top item on the television news on Sunday evening in Germany, Austria and in German-speaking Switzerland, and his photo was splashed across front pages on Monday.

Television channels in all three countries made last-minute changes to their schedules on Sunday night for retrospectives of Juergens' five-decade career — he sold 100 million records — with more programmes to follow on Monday evening.

His native Austrian city of Klagenfurt was considering renaming both its airport and a street after the singer.

Germany's Bild Zeitung's front page said "Merci, Genie!" ("Thank you genius!"), while several others went with "Merci, Udo" in a nod to his first hit, "Merci, Cherie" ("Thank you, darling"), which won him the Eurovision Song Contest in 1966.

"Udo Juergens was THE greatest in the business," Spiegel Online said. "It was inconceivable that Udo Juergens would ever retire, particularly if you had seen him on stage recently."

The singer's official Facebook page was inundated with tributes. One contributor said Juergens "and his music have accompanied me all my life … as a little girl, a woman and now almost 50 … Thank you Udo for your music … Rest in peace".

Juergens, who would often take to the stage in a signature white bathrobe, was born in Klagenfurt in 1934 as Udo Juergen Bockelman and decided aged 12 to devote his life to music, studying at Salzburg's prestigious Mozarteum.

He became synonymous with the "schlager" style of popular music, but unlike the often saccharine, pedestrian offerings of the genre his lyrics were often thoughtful, funny and challenging of bourgeois social mores.

His breakthrough came with "Merci, Cherie" while other hits like "Griechischer Wein" ("Greek Wine") and "Ich war noch niemals in New York" ("I've never been to New York") made him a household name.

"He basically wrote the soundtrack to the German Federal Republic of the last 50 years," said German comedian Hape Kerkeling.

He was comparatively little known outside the German-speaking world, although he went on tour in Japan and elsewhere and many of his 1,000 compositions were performed by the likes of Shirley Bassey, Sammy Davis Jr. and Bing Crosby.

When he died he was in the middle of a tour for his last album "Mitten im Leben" ("Halfway through life"), last performing in Zurich two weeks ago and booked for a sell-out gig in Rostock in Germany in February.

"I don't notice any difference from before apart from the usual typical little aches and pains that come with getting older," he said recently, aiming to keep going "as long as my feet will carry me".

The father-of-four collapsed on Sunday afternoon while walking in Switzerland, his adopted homeland since 2007, and was pronounced dead in hospital.

"With Udo Juergens' death we have lost a great of the German chanson," German President Joachim Gauck said. "His songs accompanied us all and made us happy, sometimes consoling us and making us think too."