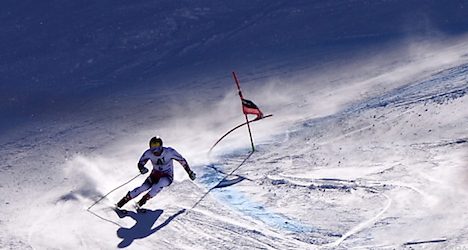 This fourth success of the season took Hirscher's tally to 27, one clear of Klammer, the former Olympic champion who dominated the downhill discipline in the 1970s.

"I may have beaten Klammer's total but he only had downhills to compete in, and so, for the time being, that doesn't interest me, in a few years perhaps," he said.

Hirscher still has some way to go to threaten Swedish alpine ski great Ingemar Stenmark's record of 86 World Cup titles in a 16-season career from 1974 to 1989.

The in-form 25-year-old was adding this to his wins in the giant slaloms in Solden and Are, the Swedish resort where he also took this month's slalom.

Norway's speed specialist Kjetil Jansrud remains in control of the overall World Cup standings but Hirscher will have the chance to overtake him in Monday's slalom under the floodlit Madonna di Campillo slope.

"This is my best ever start to a World Cup season," commented Hirscher.

"But I still have Kjetil in front of me. He skies incredibly well in speed races, he never makes a mistake."

"I was very unhappy with it, the second was more convincing, with more spaces between gates and more speed," the 30-year-old said.

He added that his left hand continued to give him problems – last month he underwent surgery after breaking a bone in his wrist in a training fall.