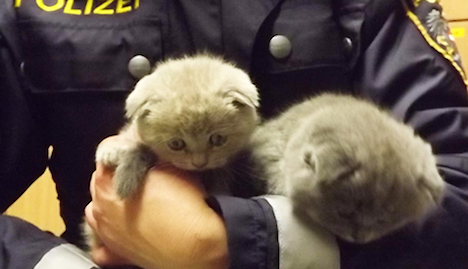 Two of the rescued kittens. Photo: Burgenland Police department
When questioned, the 29-year-old driver revealed that he was transporting the animals from Ukraine to France.  He had provided neither food nor water for the kittens, which were housed in two animal transport boxes.
The kittens, apparently a breed of British Shorthair, were on a journey of 1,800 km, taking more than 19 hours – and without food and water, this was a clear case of animal cruelty.
Furthermore, the vaccination certificates for the animals were fake.  According to a veterinarian, the age of the baby cats didn't match the documentation provided, suggesting they were vaccinated before they were born – a clear impossibility.
The kittens were seized, and taken to an animal rescue shelter.
The kitten-smuggler was reported, and fined a security deposit, then allowed to continue his journey without the kittens.